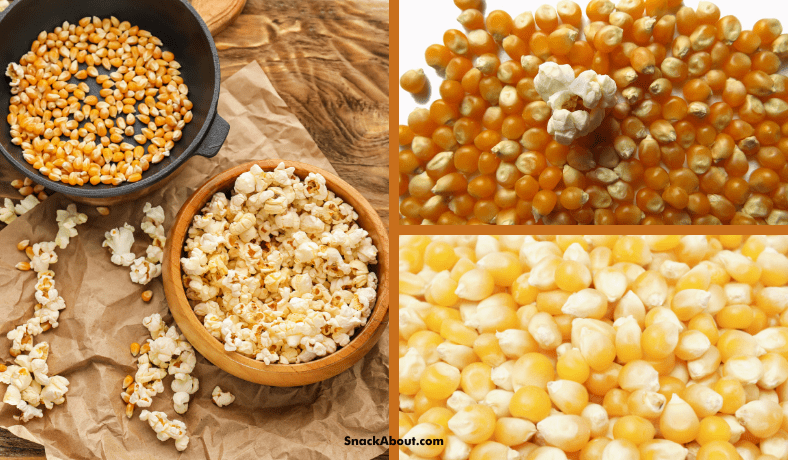 Want to learn more about where popcorn comes from and what kind of corn makes that delicious popped treat? Read on to learn more!

This article is part of The Great Big Guide To Popcorn.

What kind of corn does popcorn come from? How do we get popcorn kernels? 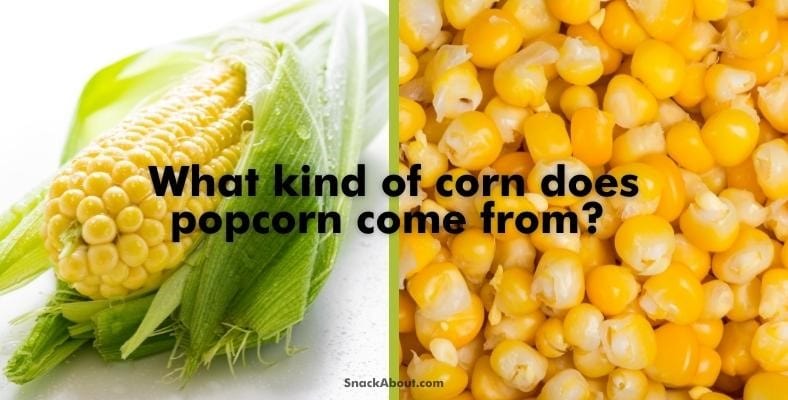 You may be surprised to learn you can’t go out to your neighbors’ field, grab an ear of corn, shuck said corn, remove it from the stalk, then toss it in a pan or the microwave, and popcorn will magically appear. So where do popcorn kernels come from?

The popcorn that we know and love for its fluffy texture and delightful taste comes from Maize. Maize is the only type of corn plant that produces popcorn due to the corn seeds containing the correct ratio of moisture and starches.

Maize, also known as Zea mays everta, is a Native American plant grown specifically for its detonating cooking experience. Maize has a very similar look to sweet corn, which makes it easy to confuse the two.

There are two types of popcorn seeds, pearl, and rice. The most notable difference between the two is the shape of the unpopped kernels. Pearl popcorn is symmetrical and round, while rice popcorn has an oblong shape.

The corn kernels on Maize plants take approximately 100 days to mature and typically produce one to two ears per stalk.

What is the difference between field corn and popcorn? 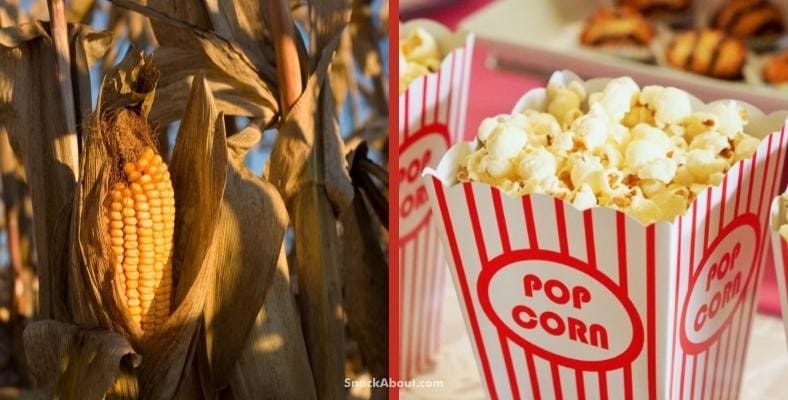 Field corn and popcorn, while both types of corn, serve very different purposes. Field corn is used to make cornmeal and is what you often see growing in those big crop fields. This type of corn is also used in grain feed for livestock.

Popcorn, on the other hand, contains a higher starch content and undergoes inbreeding to produce the right balance of starches and moisture to ensure it pops. As previously mentioned, popcorn comes from a very specific type of corn called Maize.

Is popcorn made from sweet corn? Categories of corn

In short, no, popcorn is not made from sweet corn. While we enjoy eating popcorn and sweet corn in their intended form, they are two very different types of corn. Both sweet corn and popcorn make for a sweet and memorable snack-especially accompanied with an unhealthy amount of butter-they are far from interchangeable.

Here are the categories of corn and what they are best used for:

Sweet corn is the corn on the cob king. It is typically grown in smaller batches than field corn and is what makes up canned corn-not to confuse with candy corn.

Ornamental corn is the type of corn we see in the fall when people decorate their homes and yards for autumn. The colorful kernels make it a desired decorative piece.

Field corn is used to make cornmeal and is most likely what you see growing on those large crop farms in the rural United States. Field corn is also used in livestock feed.

Is the only type of corn that pops when heated and contains a higher level of starch to turn it into its fluffy, cooked form. Popcorn goes through years of inbreeding to get the desired traits for a proper pop.

Why does popcorn pop? 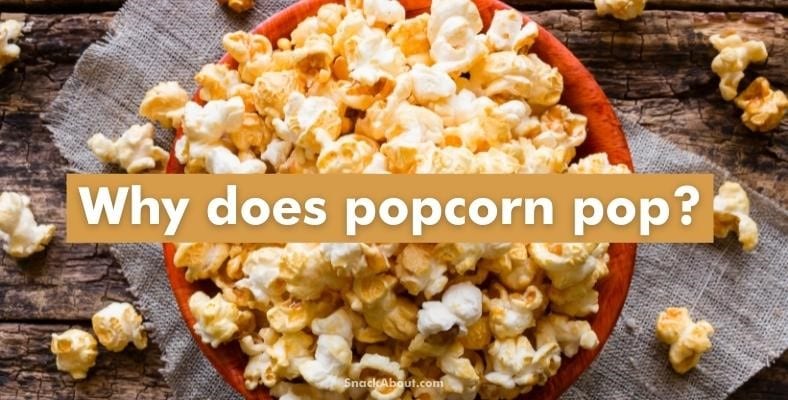 Pressure is the short answer to why popcorn pops. When the popcorn kernel is heated, the heat causes the moisture in the kernel to release pressurized steam. That steam mixed with the makeup of the kernel causes it to expand until the hull cannot withstand the pressure anymore. When the kernel pops, it is essentially turning itself inside out.

What is in popcorn that makes it pop?

Popcorn is made up of three different components; endosperm, germ, and the pericarp (more commonly known as the hull).

Moisture mixed with the starches in the endosperm of the kernel are what makes the popcorn pop. To ensure popcorn plants have the necessary traits to pop, popcorn seeds are bred for these genetic traits.

What happens to a popcorn kernel as it prepares to pop?

When you heat the corn kernels in a microwave or popcorn machine, it causes the moisture in the seed to turn into pressurized steam. This steam causes the starches in the popcorn seed to gelatinize, which causes the outer layer to soften.

The softening of the outer layer mixed with the pressure of the steam causes the hulls to rupture. Once the hulls rupture, the popcorn flowers out, creating the fluffy and delightful popcorn we all love. Add some butter and salt, and your popcorn is ready for consumption!

If you boil popcorn seeds would they pop? 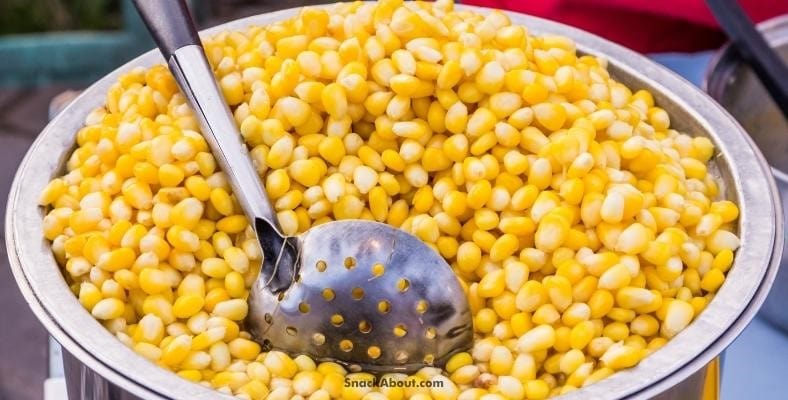 Because the kernel hull needs to be dry to pop, you cannot boil popcorn and expect to get a bowl of popcorn to enjoy. Not to mention, if the popcorn seed did pop in the water, it would get soggy and ruin the treat.

However, you can boil popcorn if you wish to produce half-popped kernels. After heating a pot of water to a boil, drop your popcorn kernels into the pot and leave for roughly 30 minutes. This will cause a partial pop. Remove the half-popped corn and let them completely dry before air popping the rest of the way.

How corn is pollinated and grows 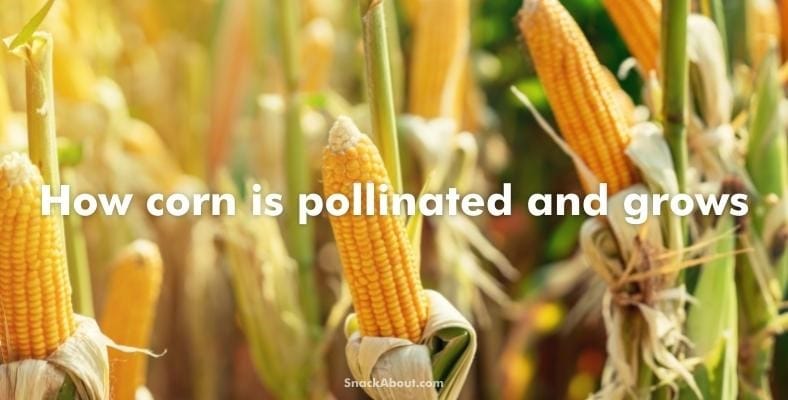 When the corn stalks begin to produce the ears of corn, they also grow a tassel at the top. This tassel produces pollen which is a yellow powder. When the wind blows, it releases this pollen into the air, and other ears of corn catch the pollen with their tassels. This process is known as pollination.

Pollination is what allows the kernels to grow. Corn also needs plenty of sunlight, water, and nutrient-rich soil to mature.

Corn can cross-pollinate. This is why it is vital to ensure you are not growing sweet corn and popcorn in too close proximity. If popcorn cross-pollinates with the sweet corn, you may end up producing some unpoppable popcorn. 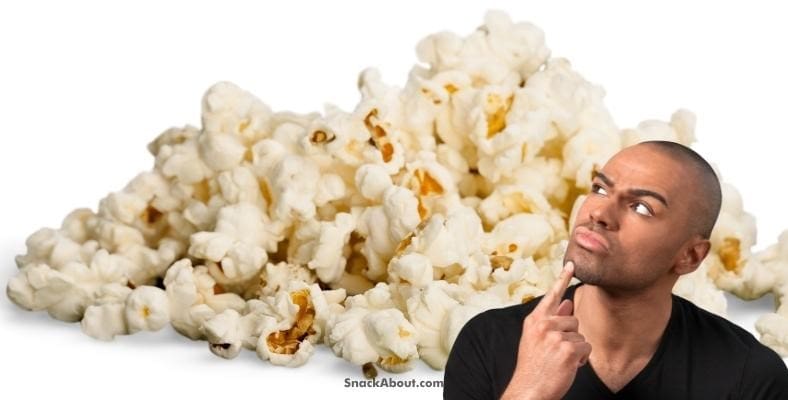 If you aren’t already sitting down, you may want to before reading this next sentence. I am happy to announce that the little fluffy clouds of goodness we call popcorn is a healthy snack.

That’s right. Popcorn contains an antioxidant called polyphenols that is in fruits and vegetables. Polyphenols are known to reduce heart disease and fight off certain types of cancer. It is also an excellent source of fiber and contains very few calories.

The best way to get the most nutrients from your popcorn is to pop them without any oil. This can be done if you closely watch your kernels on the stove or throw them in the air fryer and watch it perform its magic.

How popcorn is grown (conditions and agriculture)

Most of the world’s corn supply comes from the Midwestern states such as Kentucky, Indiana, Iowa, Illinois, Michigan, Missouri, and Nebraska. This is due to the nutrients in the soil and the pristine crop conditions that are difficult to find elsewhere.

Before popcorn can grow, the seeds undergo breeding to ensure it contains the desirable popcorn traits. These traits include stalk strength, grain color, and successful popping. Popcorn seeds go through roughly eight years of inbreeding before making their way to the soil.

When it is time for the kernels to make their way into the ground, farmers plant the popcorn seeds around 1 ½ inches deep with six inches between seeds. This means there are roughly 28,000 seeds per acre. That’s a lot of corn!

Germination takes place approximately seven days after the popcorn seeds planting date, and the plant begins to show around ten days. A mixture of the nutrients in the soil, water, and lots of sunshine makes the plant continue to grow.

Popcorn stalks grow roughly eight feet tall. They require 18-24 inches of water to successfully grow and produce the ears of corn. Once the ears pollinate and grow the kernels, they mature until the plant turns a brown color and dries out. Once it has reached this stage, it is time to harvest! 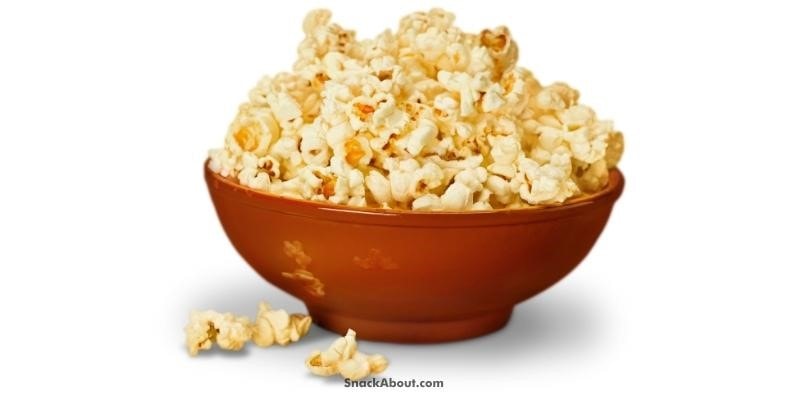 While we have determined what causes popcorn to pop and the science behind the product, this isn’t what the Native American folklore tells. According to the legend, spirits housed themselves in the popcorn kernels and lived a happy and content life.

Whether you believe in this Native American folklore or not, we know one thing for sure; heat causes pressure, and the pressure is necessary for the kernels to pop.

Whether or not that pressure becomes too much for the kernel or the spirit in the kernel to bear is something you can decide for yourself (ha ha).

◀ PREVIOUS: Can you eat expired popcorn?
NEXT: White vs yellow popcorn ▶