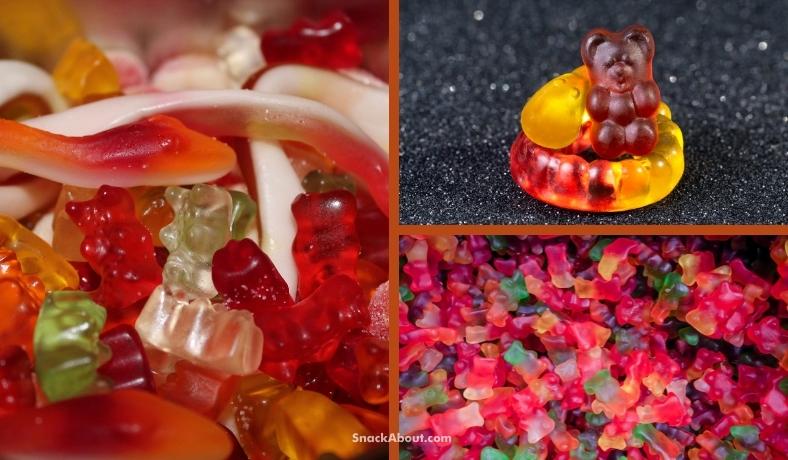 This article is part of the All About Gummy Candy guide.

What Are Gummy Bears and Gummy Worms Made Of? 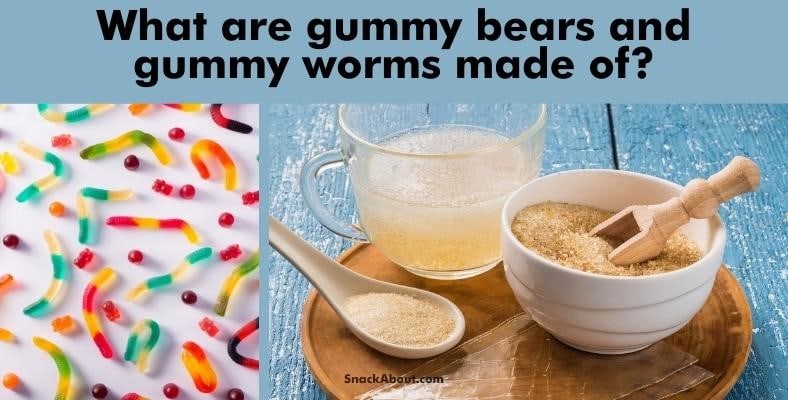 Most kids, teens, and candy lovers find gummy bears and gummy worms tasty and a delightful treat. These gummy candies are not only flavorful but also colorful and portable. They’ve won over many people’s hearts, including some adults. But have you ever stopped to think about what’s in them?

What are gummy bears and gummy worms made of? If you asked me this question a while back, I’d just say they’re made of gelatin.  However, I didn’t know what gelatin was back then until I sent myself on a mission to find out.

Gummy gelatin source and other ingredients in gummy candy

Gelatin is a protein derived from boiling animal by-products, mainly pigs and cows. It can be skin, fat, bones, or ligaments put in water then brought to a boil.

Gelatin is the main ingredient used in making gummy bears and gummy worms.

Other ingredients in gummy candy are:

The History of Gummy Bears and Gummy Candy 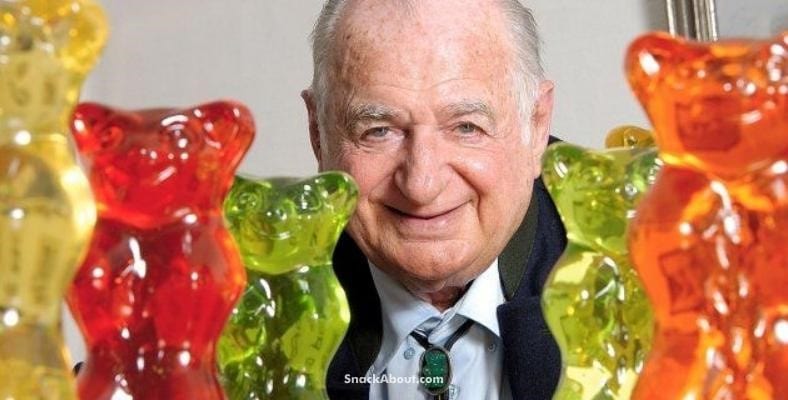 Whether you prefer gummy bears or gummy worms, these varieties came from a single dream. Hans Riegel was one poor and very frustrated confectionery factory worker in Germany.

He decided to quit his job and start his own company in the 1920s with only a bag of sugar and an excellent idea.

He first made hard and colorless candies but later opted for soft, gelatin fruit-flavored candies in the shape of dancing bears in 1922. His primary ingredient back then was gum Arabic, hence the gummy bear’s name.

Gummy bear candy has been a delightful treat in Germany since then for both kids and adults. However, it wasn’t until the 1980s that it became popular in the US.

Gummy worms drew their inspiration from gummy bears, Germany-born candies that have existed for over 90years. From this, we now know that gummy bears came first.

After gummy bears were shipped in America in 1981, a candy manufacturing company called Trolli also decided to develop candy worms.

But what are gummy bears and gummy worms made of?

Initially, the gummi worms only had two colors and flavors, but today they come in all rainbow colors, but the flavors remain at two. Gummy bears, on the other hand, had different colorings and flavorings.

The main idea behind these Trolli gummy worm candies was to shock or scare parents/adults and give kids a fun treat. I think adults no longer feel grossed out by these tasty candies. Otherwise, we wouldn’t be buying them, right?

What Is the Difference Between Gummy Bears and Gummy Worms?

Knowing what gummy bears and gummy worms are made of really helps in pointing out their differences. Is there any other difference between these two gummy candies except for the shape?

I’ve heard people debating this particular question several times. Everyone has one or two things to say about them, which is their opinion. But today, I’ll give you what I discovered from tasting both gummy bears and gummy worms separately.

It’s tough to get the differences between them since what goes into them is nearly the same. That’s evident from what gummy bears and gummy worms are made of.

One noticeable difference between these two gummy candies is their shapes. Like the names suggest, gummy bears come in a bear’s shape while gummy worms resemble a worm.

While gummy bears come in different assorted flavors in each bag (one flavor per bear, normally), gummy worms usually come in two flavors infused in one candy.

The Haribo gummy bears sold in the US, for instance, come in five flavors, namely:

Another difference lies in how big or small they are. Gummy bears are smaller, measuring only 0.8Inches long, while gummy worms are 2inches long.

Lastly, my honest opinion from what I got after eating the two candies, there’s a difference in their chewability sometimes. I realized that chewing gummy worms is harder. They’re not as flavorful and sweet as gummy bears.

I guess since they only have two flavors working together. Gummy bears, on the other hand, are treacly and soft to chew.

How Are Gummy Bears and Worms Made? 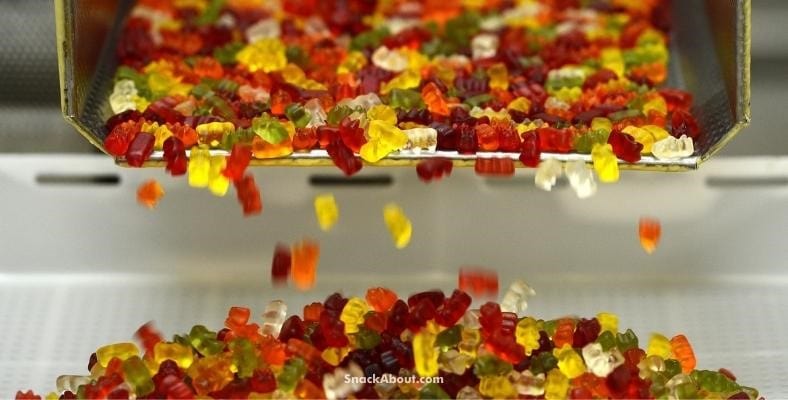 What are gummy bears and gummi worms made of? I think it’s only suitable to know the ingredients that make these tasty candies before looking at their processing. Thankfully, we touched on that topic earlier.

Nowadays, the Haribo gummy bears and gummi worms are produced in mass quantities across confectionery factories in the US. I bet most of us still don’t know what happens during processing. How are these delightful gummy candies made? Here is a step-by-step recipe on how the companies manufacture them.

How To Make Gummy Bears

How To Make Gummy Worms

What Happens if You Eat Too Many Gummy Worms? 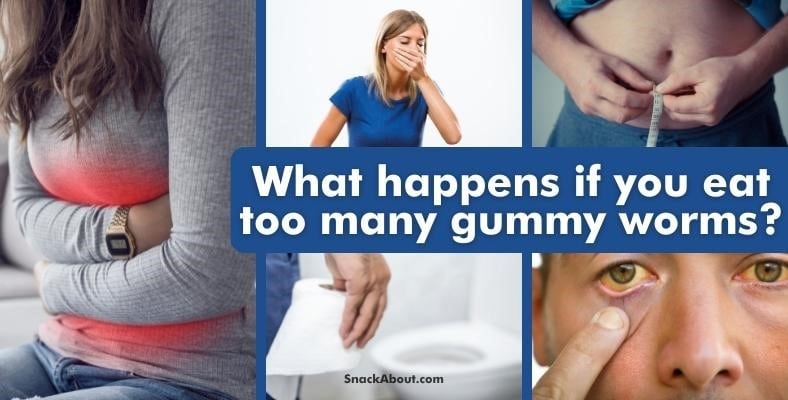 Gummy worms contain multiple vitamins drawn from sugar, gelatin, corn starch, and food colorings. They’re also full of calories. All these are good for your health, but only when taken in moderation.

Eating too many gummy worms causes several health issues. Consuming too much sugar and calories can lead to stomach upsets, vomiting, obesity, diarrhea, and liver failure.

Don’t worry though as serious health problems would be an extreme case and very out of the ordinary.

It can also lead to teeth sensitivity issues due to the excess calcium built in your blood. That’s because the bacteria in your mouth turns the sugar from these candies into acidic form, eating away the enamel.

Your main concerns about eating too many gummy worms or gummy cand would be an upset stomach or teeth problems usually, so you’ll always want to brush and floss your teeth.

Is Gummy Candy Healthier Than Chocolate? 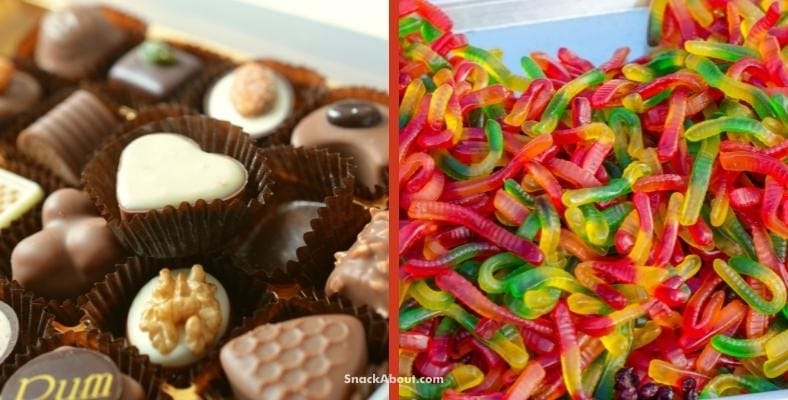 The gelatin used in making gummy candies contain protein necessary for your body’s growth and wellbeing. It’s a good source of amino acid glycine, which contributes to your cellular growth.

Although gelatin has been proven to be full of health benefits, gummy candies also contain too much sugar that is not good for the teeth. Contrary, chocolate doesn’t have too much sugar, making it a healthy alternative to gummy candy.

We chew gummy candy. That’s the right way to enjoy them, in my view. For this reason, gummy candies can easily stick to the teeth, causing problems like tooth decay. Chocolates don’t stick to your teeth.

Overall, gummy candy is not healthier than chocolate. 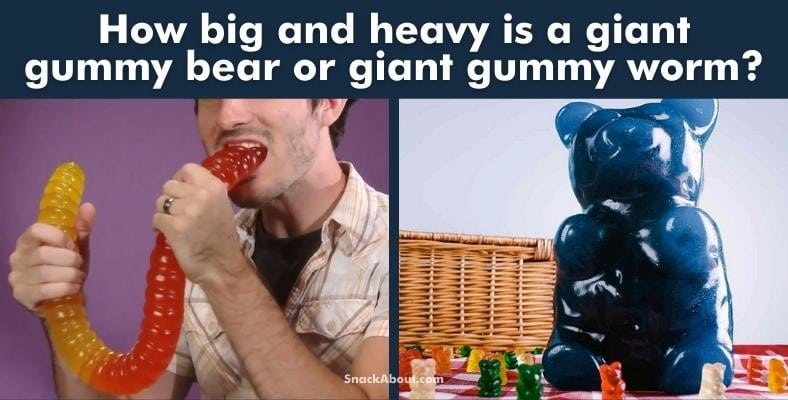 Originally, companies only made small gummy bears sold to consumers from the retail candy stores. Today, we have the world’s largest gummy bear and gummy worm, perfect for family gatherings and thanksgiving parties.

There’s no other candy in the world that is more powerful than the world’s giant gummy bear. It doesn’t only command in weight and size but also in taste.

The weight of a giant gummy bear is approximately 5lbs (about 11 kilograms). It’s also 9.5inches tall and contains about 6120 calories. Compared to regular gummy bears, around 1400 of them can go in it.

That’s how magnificent a giant gummy bear is – amazing!

The best thing about the giant gummy bear is that it has a more extended shelf life than regular gummy bears. It can last up to one year if stored well. That is, keeping them inside a plastic bag and away from heat and direct sunlight.

But I bet no candy lover can keep these irresistible delights for long.

Approximately 128 regular gummy worms can go into the world’s most giant gummy worm hand-made in the US. I believe this is the most mouth-watering candy worm ever.

It comes in seven different dual flavor combinations, a cute smiley face and a ribbed body, similar to the smaller versions. The world’s giant gummy worm is 3lbs heavy and approximately 26inches long.

It also has a one-year shelf life, so you mustn’t be in a rush to finish it all in one sitting. Doing so can turn out quite dangerous for your health, especially with the number of calories it carries, 4000 calories. 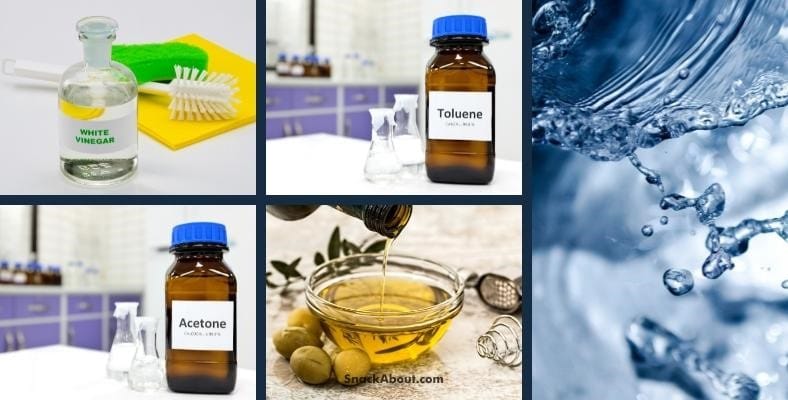 Gummy bears can dissolve in water, toluene, acetone, vinegar, and oil. But putting these bears in hot water will help dissolve them faster.

Bovine gelatin used to make gummy bears is water-soluble. Of course, you quicken solubility whenever you increase the temperature.